On February 24, 2021, Brazil’s Administrative Council for Economic Defense (“CADE”) published the study entitled “Settlement Agreements in Law No. 12,529/11”, which presents the results of research that extensively analyzed 349 Settlement Agreements (“Termos de Compromisso de Cessação” or “TCCs”) signed between 2012 and 2019, during the validity of the referred legislation.

The TCC is a type of agreement entered into with CADE and the companies and/or individuals investigated for breach of the economic order, whereby the antitrust authority agrees to suspend investigations in relation to the parties to the agreement, while such parties are fulfilling the terms of the commitment. Among the requirements to be observed in the TCC are: the parties’ cooperation during the discovery phase; the payment of pecuniary contribution to the Fund for the Defense of Collective Rights (“FDD”); the recognition, by the parties to the agreement, of participation in the investigated conduct, in cartel cases.

Initially, the study found an increase in the number of TCCs entered into between the years 2015 and 2018 and a significant drop in 2019.

Number of TCCs entered into 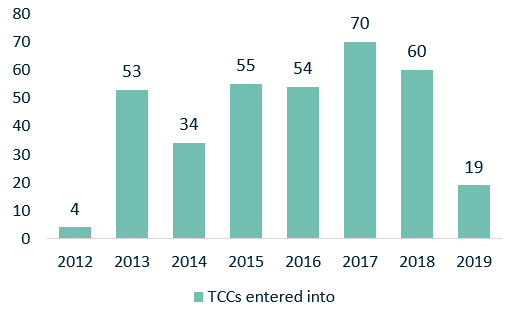 According to the study, most TCCs were entered into in the context of investigations of hardcore cartels (51%), followed by unilateral conduct (22%) and by influence of uniform conduct practices (12%). The study also revealed that, especially for investigations of hardcore cartels, the presence of individuals in TCC negotiations substantially shortened the period of negotiations. Regarding the value of the pecuniary contribution, the study found that, in 70% of the signed TCCs, there was a relaxation in the legal provision regarding the calculation basis, both in the material and the temporal criteria.

The study also provides a statistical survey on the frequency of application of the TCC clauses, such as the “umbrella”, adhesion, conduct cessation, and recognition of participation in the conduct clauses, among others. The umbrella clause, for example, which allows the company to include in the TCC employees involved in the conduct who have not been identified at the time of the conclusion of the agreement, which was applied in 29.2% of the analyzed cases, results in a 10% overall increase in the financial contribution.

Based on the analysis of the compiled data, the study shows that, regarding TCCs, despite the occasional relaxation resulting from specificities of the case, CADE’s case law has become increasingly uniform and has applied more standardized solutions and clearer criteria that provide greater legal certainty to companies and individuals.

Performance cookies are used to understand and analyze the key performance indexes of the website which helps in delivering a better user experience for the visitors.

Other uncategorized cookies are those that are being analyzed and have not been classified into a category as yet.

Analytical cookies are used to understand how visitors interact with the website. These cookies help provide information on metrics the number of visitors, bounce rate, traffic source, etc.

Advertisement cookies are used to provide visitors with relevant ads and marketing campaigns. These cookies track visitors across websites and collect information to provide customized ads.